We have some great improvements to DSA coming your way. We hope you enjoy them and we look forward to hearing your feedback.

Greetings, summoners! It’s been five months since the release of Disney Sorcerer’s Arena and we couldn’t be more thrilled with its success. As a team, we continually strive to improve the game as it exists today, but we also keep our eyes on the game’s future. Part of that future begins now! We have some epic features coming in the near future and, in preparation for that, will be increasing the maximum level as well introducing a whole new tier of Enchanted Gear. With new Tiers comes new ability upgrades, too! Every character has multiple abilities with upgrade(s) – some of which provide a whole new, exciting twist on the ability!

As part of this update, we’ll be adjusting how Enchanted Gear operates. Previously, all Characters shared components as part of a recipe. This ultimately had an undesirable effect of having to focus on a single Character as materials became more scarce at the later Tiers. Having these types of decisions can be an interesting choice but we felt like it was far too restrictive to improving multiple Characters. Beginning at Tier 7, most materials will instead be shared among Characters within the same affinity (e.g. Kingdom, Oceanic, Wilds, etc.). We’ve also taken steps to make previous Tiers’ Enchanted Gear more available and will continue to keep an eye on this.

Increased Gear Tier to 7.5 (Half the gear will be available in the beginning) – Definitely DON’T look at the placeholder pieces 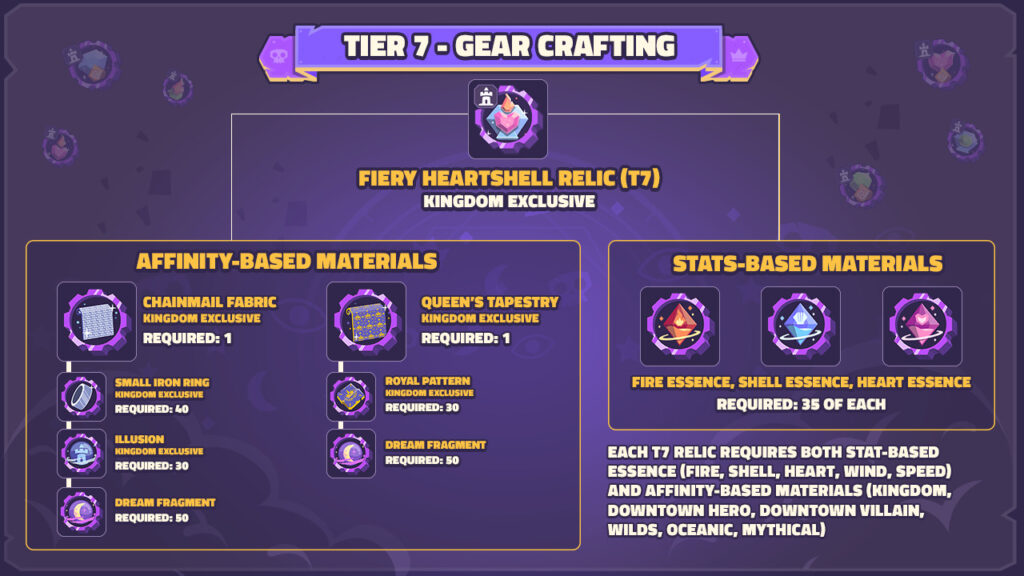 Unlocked New Character Abilities – Comb through your favorite characters and see what new upgrades are available! (We will upload a document with ALL the unlocks to our official Discord in the near future)

Club Dungeon – You can now complete level 20 and continue to battle on node 20!

We’re happy with how Hiro Hamada plays but, in some scenarios, he’s negatively impacting the game experience for many involved. Looking at the data, Hiro Hamada has been responsible for some significant increases in PvP durations – up to and including running out of turns more commonly than we’re comfortable with. As a result, we’ve made these changes in an effort to keep his uniqueness but also curb his battle duration-increasing effect. We continually keep eyes on all the Characters and how they perform and will make adjustments as needed for the long-term health of the game.

Emperor Zurg – Changed the bonus damage on upgrade level 2 of “Evil Aim” ability to be 30% instead of 10%.

Hades – Increased base chance to inflict Continuous damage on “Combust” from 35% to 50%. Damage dealt was slightly reduced to account for this.

Hades – Increased activation threshold of “Unbridled Rage” from 50% to 60%.

Hopper  – Removed Magic cost for “What’s Yours Is Mine”. Replaced lvl 2 upgrade ‘Decrease required Magic by 1’ with ‘+2% chance to activate’.

Horned King – Increased the chance to inflict Heal Block on the “Dark Force” ability at level 2 from 20% to 50%. Damage dealt was slightly reduced to account for this.

Jack Sparrow – Increased assist chance on “Resourceful Offense” from 5% to 10% at base level. Damage dealt was slightly reduced to account for this.

Kronk – Increased threshold on his passive “Refreshing Workout” from 50% to 60%.

Madam Mim – Fixed a bug on Madam Mim’s “Withering Seep” ability where she was inflicting adjacent allies with Helpful Immunity.

Olaf – Previous level 3 upgrade for passive “Water Has Memory” unlocked at Gear Tier 6 and was not actually doing anything even though it said it provided a ‘+5% chance to activate’. This upgrade now unlocks at Gear Tier 7 and does the following: ‘+10% maximum Health restored.’

Pocahontas – Reduced Magic cost of Pocahontas’ “Spirit of the Deer” passive ability from 3 to 2.

Rafiki – Increased extra attack chance from 10% to 20% on level 2 upgrade of the ability “Correction!”.

Rafiki – Increased extra attack chance from 10% to 50% on level 2 upgrade of the ability “Don’t Dawdle!”. Damage was slightly reduced to account for this.

Rafiki – Increased chance for Rafiki to gain Evade with his “Wise Move” level 2 ability upgrade from 30% to 50%.

Sally – Increased chance to inflict Slow on level 2 upgrade of “Deadly Nightshade” from 30% to 50%. Slightly reduced damage to account for this.

Sally – Increase starting Magic of her “Self-Sewn” ability from 0 to 1.

Sergeant Calhoun – The ability “Combat Maneuvers” is now guaranteed to inflict Defense Down rather than having a chance. Damage output on the follow up attack was slightly reduced to account for this.

Shan Yu – Changed the level 3 upgrade for the ability “Bow to Me!” from ‘5% chance to perform an Extra Attack on dealing Critical Strike’ to ‘+5% Speed Meter decrease’. The original level 3 upgrade was bugged and not working.

Sheriff of Nottingham – Increased base bonus damage vs. Shielded opponents with “Well-Timed Treachery” from 10% to 75%. Increased level 2 upgrade bonus damage from 25% to 30%.

Sorcerer’s Apprentice Mickey – Increased activation chance of the “Helping Hand” ability from 10% at base to 20% and +5% at upgrade level 2 to +10%.

Maui’s Wanna get Smote? No works as intended

Hoppers’ What’s yours is mine ability now affects magic meter

We greatly appreciate you all and are happy to have you in our community. We look forward to hearing what you have to say as we continue to build on DSA!

Be sure to join our Official Discord!