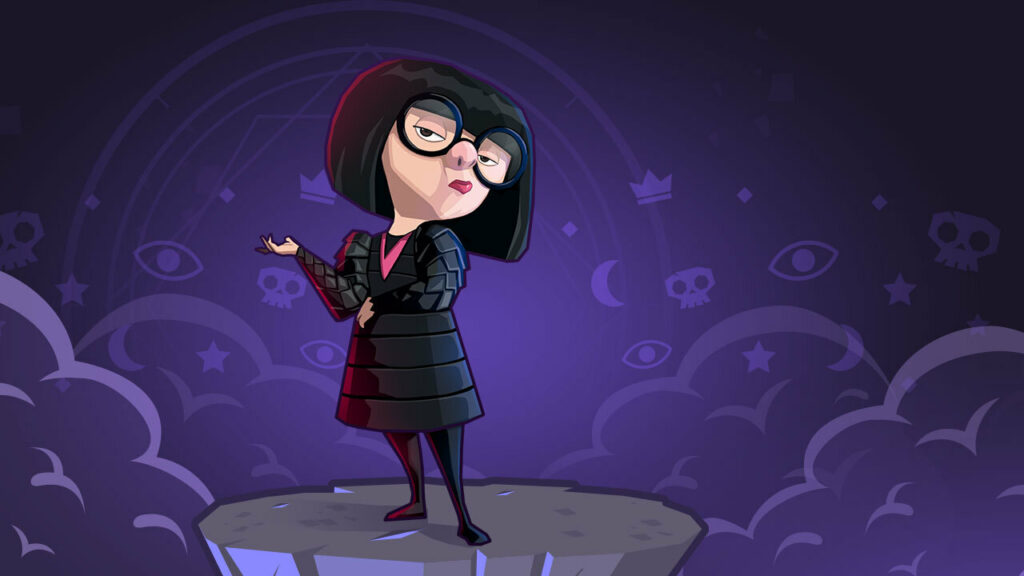 Here are the notes for the upcoming update!

Power up your cape-wearing characters and Incredibles team to battle through the NO CAPES Legendary Event and earn tokens for EDNA MODE!

The following characters will be required to battle through the event and unlock this bold new addition to the Arena:

Remember to login every day in October to collect the Daily Login Calendar rewards and earn the CLASSIC MR. INCREDIBLE OUTFIT on the last day in October. Missed a day? No problem! You can purchase missed days with gems. Don’t miss out!

Elastigirl is at the top of her game! She’ll stretch to hit multiple opponents with her special abilities to Stun and snatch their Helpful effects, and she’ll leap into action to counterattack when her kids take damage. Her new passive will allow her to Stay Flexible enough to avoid attacks and adapt to any team composition!

Mr. Incredible has swapped those horrible Taunting pajamas he used to wear for new bold Protects, Counterattacks, and Undefeatables! He’ll energize his family with Speed Meter and Magic, and team up with Elastigirl to Stun their opponents.

Violet has embraced her powers and will be using them passively to stay out of the spotlight and support her family with Shields and Helpful effects. She’ll team up with her baby brother to flatten her foes with her new Incrediball ability and strip their Helpful effects!

Dash wants to win every race by stealing speed meter from opponents when his turn comes around. Hard to keep this speedster in second place!

Jack-Jack is a wildcard who will keep his foes on their toes with consistent assists when his family attack or take damage. Though his unpredictable attacks may repeat many times, he’ll try to pull out his best powers when he’s paired with his family. He may even assist with one of his special abilities!

Edna Mode is returning to Hero work! This ornery support will make sure her team is decked out in only the finest Helpful effects and none of those horrible Harmful effects – she won’t allow it! She’ll call her team of Supers and fabulously outfitted Heroes to assist, and most importantly, she’ll make sure that no one is wearing one of the Harmful Capes!

The following bug fixes will be rolling out in this week’s update:

[Jafar] T-Pose fix (resolved on 09/30)
[Daisy] Tactics to guarantee follow up attack
[March Hare] You Must Have a Cup of Tea! Ability – Repeat to apply to random teammates
[White Rabbit] Special A – Health Restore % string updated in all languages to reflect correct number
[White Rabbit] Special B – Will only apply “slow” and random (2) harmful effects for (1) turn, as intended
[Mad Hatter] Upon death, Passive A trigger no longer grants speed meter to opponents or teammates
[Mad Hatter] Special A roll out animation fixed

Passive A
– New: Chance to counterattack when Violet, Dash, or Jack-Jack take damage, dealing damage and reducing speed meter. If children are defeated, ability crits.
– New: At Lvl 2, Chance to give ‘The Incredibles’ Hero teammates Magic.

– Change: Instead of gaining Taunt, Mr. Incredible will gain Protect.
– New: Inflict Intimidate on attacker and one random opponent.
– New: At Lvl 2, On Defeat, call all ‘The Incredibles’ Hero teammates and to assist on random opponents.

– Change: Guaranteed to inflict Defense Down.

– Deal damage to target and flanking opponents. Purge Helpful effects, preferring Taunt and Protect. If Dash is a teammate, he and this character gain Shield and Haste.

Passive A (Previous Special B)

– Change: At Lvl 4, If Violet is a teammate, she will assist.

– New: At Lvl 1, On Turn start, Steal Speed Meter per CHARGED from the opponent with the highest Speed meter.

– New: At lvl 4, Increase the chance to perform Metal Jack-Jack and Electric Jack-Jack per ‘The Incredibles’ Hero teammates.